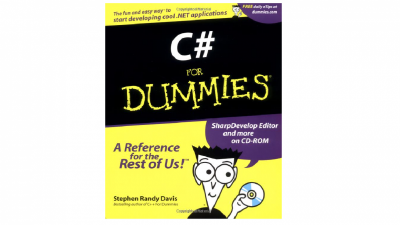 Post about what need to know to an algorithmic trader, the programmer C#. What basic knowledge you need to have in

order to write robots in StockSharp / Wealth-Lab / TsLab Api. It's about programming. The post will be useful first of all for

traders starting their way into the algorithmic trading as a road map.

This is the second chapter of a series of posts by algorithmic trading using C#. Firts part here.

1) Who is a programmer

I have good news for you. There are no restrictions on a person's ability to learn a programming language at all. It's just

another way of communicating. Just as a person talks to another person, so a person can talk with machine. This is

completely natural, basic functionality of 99% of the inhabitants of this planet.

As in mastering spoken languages, learning programming languages requires practice. And nothing else.

But,despite the incredibly low requirements for studying programming, there are a number of skills that significantly

accelerate reincarnation of man into programmer. Here they are:

Take closer look at these cubes. I will not describe them. But know - pumping each of them will significantly accelerate your

Probably the most difficult part of becoming a programmer. When, because of their own indiscipline and unwillingness to

practice, people can turn away from the light path of evolution.

If we compare it with studying language, it’s studying alphabet. Ability to pronounce separate syllables and words. For

childrens, this stage takes up for four years. But since programming languages are hundreds of times simpler than real

languages, it will take us from one to three months. Depending on amount of practice.

I'm well aware that it all looks complicated. But there is no way without it. It is necessary to study carefully and without a

The main thing in this case is not to stop.

Studying ways of working with information and structuring it.

At this stage, child learn how to collect words in sentences. Signs of punctuations, intonations, types of sentences. We study methods of working with

base data types, forms and methods of their grouping, methods of working with grouped and distributed data.

This stage will take us two to five months to complete.

Remembering myself, it seems to me that it took at least six months to do so. I worked and tried to study at same time. As a result, it took me five to

seven hours a week. However, even at that rhythm, I managed to do it.

Despite the fact that it is baseboard level of programming knowledge - after learning it you can start programming strategies in Wealth - Lab code editor!

And to test your strategies in one of the best station for strategy testing.

Total: before full use of Wealth - Lab code editor is necessary - about three months of time C# learning.

After studying this block of programming knowledge, you can work as a programmer.

In case of trading, after studying these blocks, we can finally move on exploring StockSharp.Api, TsLab.Api. And it will take about three months.

I've got half contacts in Skype made up of programmers. And half of this half bought a course of StockSharp from "comrade" Sukhov. And not one of

So, I address them first of all:

- Friends, check your knowledge against this board. And if something is missing - teach. Write down educational projects. Design distributed

architectures, do it multithreaded, generate and intercept exceptions yourself. Use fucking polymorphism where you don't need it, even if you're sick!

This is the only way to write a robot on StockSharp.

As the first book I recommend “Programming in the Key of C#: A Primer for Aspiring Programmers “. I can't say that it's the best book of its kind, but it's

the first book about programming that I've been able to read to the end.

In this post we reviewed the Programmer's Knowledge Map - an algorithmic trader. I hope it will be useful

for many beginners. That course could be excessive, but it's like this. Learn C# - write robots.